Hello Readers! This is part 7 of the blog post series “ARM concepts in Azure Stack for the WAP Administrator.” In this post we’ll focus on the VM configuration itself, leveraging Azure Resource Manager (ARM), VM Extensions and PowerShell DSC.

Note
Some information relates to pre-released product which may be substantially modified before it’s commercially released. Microsoft makes no warranties, express or implied, with respect to the information provided here.

Here is the table of contents for the series of post so that you’ll find it easier to navigate across the series:

Victor Arzate has done a great job in laying down the foundation for this blog post by describing how to deploy resources and multi-tier applications. In this blog post we will dive deeper in how to configure a VM, also known as in-guest configuration. We will briefly revisit the options you have in Windows Azure Pack (WAP), look at Azure Stack and discover the similarities between the two.

Let’s revisit  the options in WAP to deploy a VM: 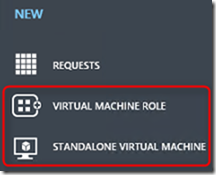 And as mentioned in the previous posts, Service Management Automation (SMA) can be used to automate and orchestrate a VM deployment and configuration (and much more) in WAP.

Desired State Configuration (DSC) can be used to declare the end state of your deployment which can be applied during or after a deployment. With stand-alone virtual machines, you usually deploy a VM with only the operating system installed, but what about if you need more than this? Let’s say, for example, you want to deploy a VM with SQL server? Then you need a technology that allows you to configure the VM itself, once it has been deployed with an OS. VM Roles allow you to perform this as it will deploy the VM with the OS desired and second, it will allow you to perform in-guest configuration via PowerShell DSC. For our example with SQL Server, PowerShell DSC allows you to install the required OS features (for example, .Net Framework) and also it allows you to install the application and configure it as required (in this case, SQL Server). How to create VM roles and use PowerShell DSC is out of scope of this blog, but this has been extensively documented. Two great blog posts which talk about VM role deployment and DSC are:

If you are looking for a DSC jump start, then please check out this great video and if you are wondering where you can find DSC resources, please check the PowerShell Gallery.

One of the biggest differences between WAP and Azure Stack is Azure Resource Manager (ARM). If you are looking for a primer on ARM I would encourage you to check out Ryan Jones’ presentation on ARM.

Since ARM is the consistent management layer between Azure and Azure Stack and consumes JSON based templates for VM deployment and configuration, it’s the first obvious step to explore. As pointed out a couple of times already during the blog post series, please do check out and try the available Azure Stack templates here. Notice the green button in the picture below; in a couple of clicks you can download a zip file and explore all sample templates on your local machine or test them in your Azure Stack environment:

So with an ARM template you can deploy and configure your VM’s, right? Correct! Let’s look at the options:

For new VM’s deploy an ARM template leveraging the:

a) Custom Script extension, see this template as an example

b) DSC extension, see this template as an example

e) Enable the DSC VM extension and assign a configuration

In this blog post will focus on options d and f.

Note: Before we move on, it is good to emphasize that DSC investments you have made – or are going to make –  in WAP, Azure or Azure Stack – can be reused in all these areas. Write once, run everywhere!

Let’s look at the relevant VM extensions in an ARM template.

VM extension skeleton. Please note the highlighted section in red, these are different in each VM extension as depicted below.

You can refer to this sample from the Azure Stack Quick Start GitHub repository for a complete template using the custom script extension.

The Custom Script Extension can be used to invoke a script after deployment to do some post configuration work. For example, we could invoke an Azure Automation runbook leveraging this extension, like a webhook enabled runbook.

If you want to make sure that you are using the latest version of the Windows Management Framework (WMF) you can add “wmfVersion”: “latest” , see the ARM DSC Extension Settings for more information.

Note: it is in the Azure Automation backlog to support invoking an Azure Automation runbook based on a webhook in an ARM template. If you want to provide feedback on this specific topic then please navigate to this link.

Examples of Azure Stack templates which use the DSC extension can be found here.

Creating and deploying your own DSC Configuration

In the previous posts we showed you how to deploy a new VM leveraging an ARM template which included the DSC extension to complete the in-guest configuration, so we already have covered that.

You can leverage DSC in two different ways: in Push or Pull mode. As you can guess based on the names, in push mode we push the DSC configuration to a node whereas in a pull mode, the node pulls the configuration from a so called DSC Pull Server. Luckily for us, there’s a DSC Pull Server up in the cloud called Azure Automation DSC which takes a way a lot of complexity in setting up a local pull server. A local pull server is a very valid option in a fully disconnected environment, but out of scope for this blog post. Go here if you want to read up how to install a pull server. Using the Azure Automation DSC Pull Server assumes that your nodes have Internet access, but this is by far the easiest way to manage DSC configurations because your configurations are located and managed in a central place.

Let’s look at the following for this blog post:

Create your own DSC configuration

A DSC configuration is like a function in PowerShell and we will use it to declare our end state.

Perform the following steps on a machine which has Internet access since we will upload the DSC configuration to Azure Automation.

2. Save your DSC configuration locally in a folder, I’ve saved mine to C:DSC as MyCorpWebsite.ps1

3. Load your DSC configuration into memory so that we can call it (just run the PowerScript in step 1)

4. Let’s generate the MOF file which will be consumed by the Local Configuration Manager, notice that I’m passing a parameter called –NodeName which will generate a MOF file for specifically that node:

Push the DSC configuration to a node and apply

Assuming that you have the prerequisites in place, we can now push the configuration to our node (in my example my host is called HRB1):

Notice that we didn’t have to use PowerShell Remoting because of the WinRM listener being configured through Enable-PSRemoting.

It will first prompt us for our credentials:

After we’ve authenticated, we will see this is our output:

Let’s check with PowerShell Remoting if our configuration got applied:

Upload your DSC configuration to Azure Automation and compile

1.  Use the following PowerShell script to upload your DSC configuration to Azure Automation and compile it:

That will give you this output: 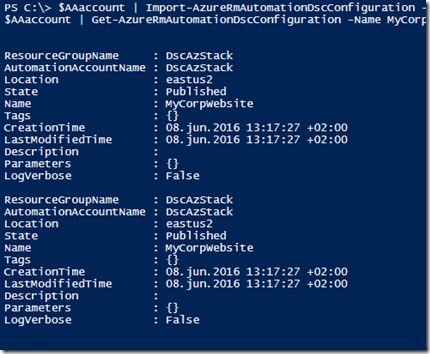 After a short while we see the completion in the Azure Automation portal: 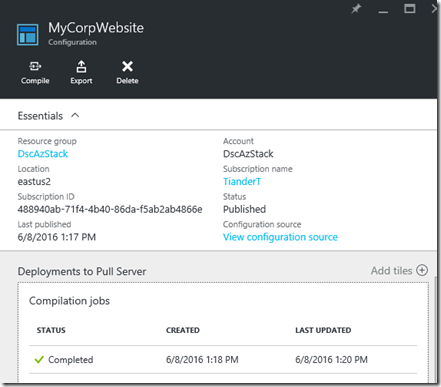 1. Through the Azure Automation portal. This is currently limited to Azure VM’s only within the same subscription

Since this blog post is focused on Azure Stack, PowerShell is going to be our option of choice.

Assign the DSC configuration to an existing VM

In the previous post Victor talked already about leveraging this Github template which you can use to onboard a non Azure VM. Let’s drill down a bit on that template.

The last line in the above PowerShell script will open up the metaconfiguration file:

These settings can all be modified and you can call these from within your own Github repository or a storage container from within Azure or Azure Stack. For example if you want to change the refresh cycle or the reboot behavior. You can find more information how to do so right here.

In the screenshot below you can see that the onboarding went successful: 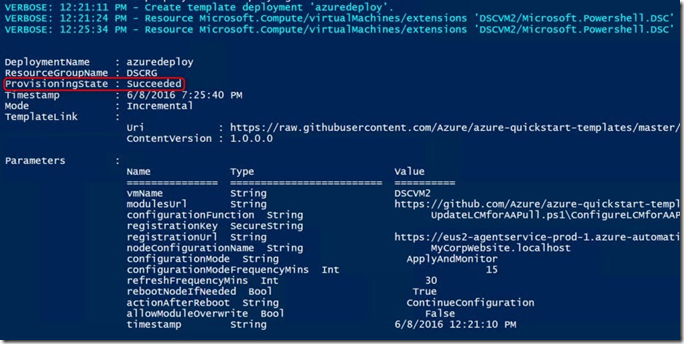 We can see in Azure Automation that the node has successfully on-boarded and it’s status:

Let’s RDP into the VM and check the configuration on the VM itself:

If we check the LCM on the machine, we can see that the VM is configured in Pull mode and being managed by Azure Automation DSC: 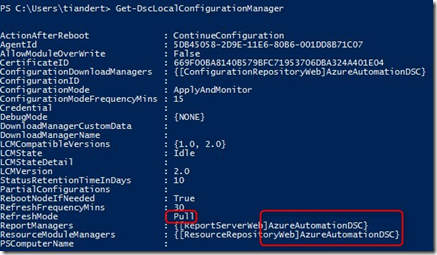 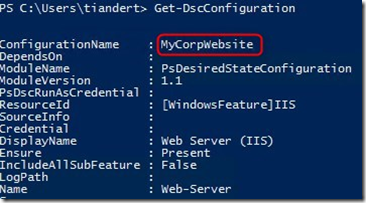 Recently I got questions if you can also leverage DSC in a DevOps scenario where you need to configure the VM with packages. Yes absolutely! Let me first emphasize that DSC is not a replacement for System Center Configuration Manager (SCCM), which is a change & configuration management solution where software distribution is an important component. SCCM is build for software distribution in a potentially connected/disconnected environment where technologies like BITS, checkpoint restarting, bandwidth throttling, etc. combined with hard and software inventory has its own place. Now back to DSC, how can I get dependency software (packages) on the VM? Well you can leverage the DSC package resource to start with:

You can define a GUID (in the above example ProductId) which will make sure that only a specific package will get installed and not a rogue MSI. This example shows how to install 7Zip.

Another option is to use an open source package manager like Chocolatey. Out of scope for this blog post, but if you want to get started with Azure Automation and Chocolately, please check out this blog post. It will talk about continuous deployment to Virtual Machines using Automation DSC and Chocolatey in great detail. 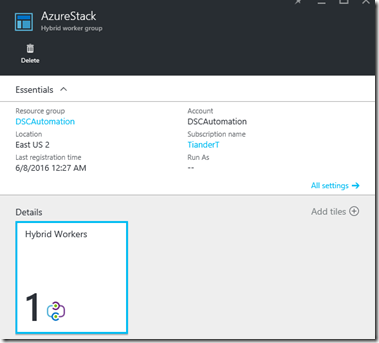 The most important takeaway from this post is that you should be able to reuse your Windows Azure Pack investments in Desired State Configuration (DSC) in Azure Stack. Your runbooks in Service Management Automation (SMA) can be potentially re-used in Azure Automation, the Hybrid Runbook Worker role might resolve challenges around executing remote runbooks versus executing them locally.

Continuing on the MAS series, in this topic I am exploring some of the Infrastructure roles. This is off a TP3 Refresh deployment of MAS. Note Everything is with respect to a point in time. The point in time reference to this is TP3 Refresh timeline, though there may be […]

Hello Readers! This blog is part 8 (and the last) of the series “ARM concepts in Azure Stack for the WAP Administrator.” In this post we’ll discuss and share troubleshooting techniques and resources that we have learned when working with customers and partners that are actively validating Microsoft Azure Stack Technical Preview 1. […]

Introduction To work with the Azure’s Resource Manager, you have a number of options. For example, you have these SDK’s to simplify development: Note: I can’t stress enough that this is simply a model I use, mostly for validation and there certainly are other choices depending on project and requirements. […]